WHY NOT IN BES? Solar Power.

Source: cnn.com
PHOENIX, Arizona (AP)—A Spanish company is planning to take 3 square miles of desert southwest of Phoenix and turn them into one of the largest solar power plants in the world.

A field of mirrors concentrate
the sun’s rays on a tower,
heating a liquid, which spins
turbines

Abengoa Solar, which has plants in Spain, northern Africa and other parts of the U.S., could begin construction as early as next year on the 280-megawatt plant in Gila Bend—a small, dusty town 50 miles southeast of Phoenix. (...)

Build, own, operate
Abengoa would build, own and operate the $1 billion plant, named the Solana Generating Station. Solana will be enough to supply up to 70,000 homes at full capacity. (...) 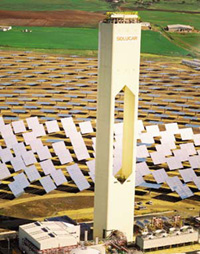 The mirrors heat a liquid in the
top of the tower. The heat is
stored and spins turbines day
and night.

Heat, not light
Unlike most solar energy, Solana will use the sun’s heat, not its light, to produce power. (...) Abengoa CEO Santiago Seage said the plant will use thousands of giant mirrors to harness the sun’s heat. That will heat up liquids, which will spin turbines—just like coal or other power plants but without the pollution.