We were baseball players. Good baseball players. No adults, no coaches, no leagues with uniforms or sissy aluminum bats that made a ‘tink’ sound. We used wood bats that, when you connected, sounded major league. In our grade school, they said we couldn’t play baseball. That we had to play softball with the tinky bats, less we hurt ourselves, get hit by the hardball, break a bat and be impaled by a flying wooden spear of Louisville Slugger. 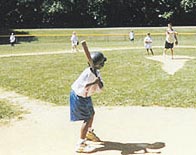 Adults? What do they know of baseball. Do they know Mickey Mantle’s all time record? His current season record? How ‘bout Roberto Clemente or the pitching greats Koufax and Drysdale? We knew them, could recite their stats better than our times tables. Between all of us, we had almost every baseball card worth having, and every card not worth having. We were baseball players.

We commandeered a vacant lot and over time turned it into a baseball field. While our fathers had to threaten us with death to get us to mow our own yards, we’d borrow the family lawn mowers and cut the weeds in our field regularly. The old rotary mowers were especially good at leveling gopher mounds and anthills. Wheelbarrow loads of dirt were hauled to build a proper pitcher’s mound.

Scrounged chicken wire and poles made the backstop. We dug out sod to make the base paths. The bases themselves were gunnysacks, slightly filled with dirt to give them the proper bulge. We could get almost half a season out of those sacks.

We rarely had enough guys to choose up teams. Instead, we played “work-up”. Three guys at bat and the rest of us taking the field. The batters hit in rotation. When one was put out, everyone moved up one position, catcher to hitter, pitcher to catcher, an outfielder to third base, and so on. The outted batter took the bottom spot in the outfield. Sometimes just a handful of players showed up. Other times the outfield would be swamped with players. No one sat out. Even with a game in progress, you could take the field. No balls or strikes were called, no score kept, and any fool knew what a foul ball was.

We played on our vacant lot field for years. Just a bunch of kids playing THE GAME. Our season corresponded with the pros. We played until the final game of the World Series. It was during the off-season that the city, probably noticing the fun we kids were having, took over our field. They brought in a road grader and graded. They planted grass, installed carefully measured base paths and pitching mound. They tore down our chicken wire backstop and replaced it with a chain link monster. They fenced in the entire field and padlocked a gate. Without adult supervision and tinky bats, baseball was played there no more.