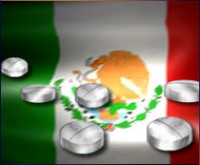 The head of Mexico’s intelligence service has said that drug cartels are threatening the country’s democratic institutions, including Congress. Guillermo Valdes told the Financial Times that drug traffickers were trying to take over the power of the state. Gangs have infiltrated police forces, justice departments and government bodies, he said. Mexico has seen a sharp increase in drug-related violence this year.

Mr Valdes, who is the head of Cisen, the government’s intelligence agency, said he could not rule out the possibility that drug money was involved in the campaigns of some members of the national Congress.

There you have it once again! Drug cartels try to take over. As long as the drug trade is lucrative, this kind of threat will continue to pop up. It happened in Colombia, it is happening in Brazil and don’t be surprised if it is happening in the USA as well. The tiny island of Curaçao is suffering under the scourge of drug lords. In Jamaica the drug lords have become war lords as well. Gangs everywhere have grown wealthy from the lucrative drugs trade, recruiting members of police forces, the judiciary and government organizations in order to protect their business.

Earlier this month US President George W Bush signed into law a $400m aid package to provide training and equipment for the fight against drug trafficking. This is $400m wasted, which should have been spent on building schools and hospitals. The war on drugs can’t be won, as long as there is a multi-trillion international drugs market. The only way the situation can be brought under control is by legalizing all drugs, with distribution via medical outlets (doctors and clinics). Drugs can be fought only by giving out truthful information and rehabilitating drugs addicts.

Since 2006 there have been an estimated 4,700 drug-related murders in Mexico with a surge in 2008. Just the other day, eight people, including two youths and a 12-year-old girl, were shot dead when gunmen opened fire on their cars. The attack happened as the victims were waiting at traffic lights in the city of Guamuchil in the state of Sinaloa. Hours earlier gunmen in Mazatlan, on Sinaloa’s coast, killed a policeman and then took dozens of people hostage in a restaurant before escaping. This kind of crime will continue to rise until we come to our senses and legalize all drugs in the way as suggested.

To throw in some different facts. Consider the pie-chart showing the causes of preventable deaths in the US in 1990. Why are we so worried about the effects of drugs? Only 1.9% died of causes related to illicit use of drugs. We are not promoting the use of drugs. Drug addiction is a plague. But alcoholism, for instance, is a worse plague. Study the pie-chart!

The selected video shows that even arch-conservatives are coming round to the position of legalization. Simply because prohibition is not working and because the ‘war on drugs’ has undermined our civil liberties and has become a threat to democracy. True it is, that with the ‘war on terrorism’ the fascist element in our societies obtained an even better hoax to undermine our freedoms. But the erosion of democracy began with the war on drugs and it is high time to end it.