Change; Opium for the Masses?

Obama will bring some change. Important change, even. But not yet the change the whole world needs. It appears we’ll have to wait until 2012. That is when shift is supposed to happen. We do not mean this in any mystical sense, although we do not slight mysticism. We are referring to the expected paradigm shift to a binary economic society, or the birth of a new civilization. Now that would be real change. The change the whole world is waiting for.

‘Solidarism’ is the one-word description we use for this new paradigm. It has generally been referred to as the ‘Just Third Way’, the Golden Mean between capitalism and socialism giving rise to a complete new paradigm. This new paradigm is not a compromise between the two, leaving both disgruntled. It is a complete new system all its own, combining the best of both. A longer description could be the ‘Green Third Way of Realism and Universal Justice’.

To the Christian West the picture below tells more than a thousand words. But Solidarism is not just for Christians. People everywhere on the globe deserve the blessings of life, liberty and property. But as this article will appear in a Caribbean magazine, our main audience is Christian or is familiar at least with Christian thought and imagery. Hence this potent image. But we stress, Solidarism (as are Communism and Capitalism) is universal, based on interfaith spirituality

In fact one economic stronghold of Islam, the prohibition on interest (or ‘Riba’), is incorporated in Solidarism. Here we give Islam its full due. Despite severe pressure throughout the centuries (to which many but not all Muslims succumbed), Islam kept insisting that interest taking on money lending is morally wrong. It is in fact one of the root causes why money corrupts and addicts, causing dire poverty on the one hand and obscene riches on the other.

Elsewhere it will be explained how lending at 0% interest can be done without making the profitable conduct of business impossible. In fact, it will make business even more profitable, as well as more equitable and less cut-throat. Solidarism, in short, heeds the Koranic admonition that ‘Those who devour interest stand like one whom Satan has smitten with insanity’ (Ch. 2: 276).

The Prophet Mohammed continues in Ch. 2:277: ‘Allah will wipe out interest and foster charity’. Allah will do so by making Solidarism or the Just Third Way the norm, replacing both Capitalism and Communism/Socialism. So, we stress: the picture does not imply any religious preference. In the mainly Christian West, however, it is a very potent way of expressing pictorially what Solidarism essentially is. But this essence is found in all serious religions. The Christ-force is universal. 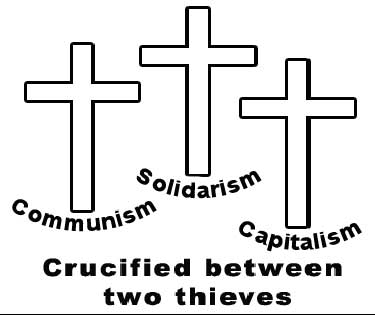 Which of the two thieves asked forgiveness?

St. Luke (23 : 40-43) recounts that one of the thieves asked Christ for forgiveness. Was it Capitalism or Socialism? Was it Cuba or the USA? A very astute question! Both systems are based on theft. Socialism ‘steals from the rich and gives to the poor’ (Robin Hood ‘nobility’), whereas Capitalism steals from the poor (interest, for instance) and gives to the rich. It is a well-known fact that the wealth-gap between rich and poor has been widening alarmingly since the downfall of Communism has prevented the poor from stealing back.

But, again, we ask: Who would sooner ask forgiveness, Fidel Castro or Dick Cheney? We have posed the question to a few people and have received opposing answers. Both are violent, both steal. Both lie. Capitalism is based on greed and is never satisfied. Socialism is based on envy and stifles all initiative. Which vice is worse? The answer to the question, we believe, can be found as we delve deeper into the origins of the emotions behind the two systems.

Survival of the fittest

Capitalism stems from the deep-rooted instinct of survival. We fight off enemies and hunt or work (make profit) to survive. In principle this is only natural. But once this instinct gets the better of us, it turns into insatiable greed. Other people then become enemies, who must by all available means (including violence) be stopped from threatening one’s winnings and property. In this, Capitalist greed is brutal, killing without any remorse.

Socialism, on the other hand, has its roots in compassion. It was a response to the extreme poverty (and abuses) caused by Capitalist greed. Socialism understood that the only way to establish itself was by annihilating Capitalism with equal force and brutality as Capitalism was using to defend itself against the Socialist onslaught. Fidel Castro violently fought his way to victory and power enabling him to ‘steal from the rich and give to the poor’, which he did, for instance, by confiscating affluent villas in Havana and converting them into schools for poor children. He also provided the best health care a poor country can reasonably provide for the poor, something the USA still does not do.

However, after Castro had stolen and used up everything, he discovered that now everybody was poor. And he also discovered that the poor were not willing to work for the common good only. So to maintain his Socialist utopia (and prevent resurgent Capitalism) massive propaganda and repression became necessary, which completed the debacle, turning everybody into poor, repressed and brain-washed automatons. He even took away their ‘religious opium’.

Nevertheless, a true socialist will in the end relent, once he sees the havoc he has wrought. Gorbachov did give in. So has Castro, to an extent at least. If he lives long enough, we believe Castro will ‘ask forgiveness’. He has already allowed the Church back in. And Cuba recently ratified the Int. Covenant on Civil and Political Rights, signaling that a change is on the way. But would George Bush or Dick Cheney ever give in? At the very least the reader will agree that there is good reason for doubt.

A vote for Capitalism

But not everybody is convinced that Socialism would sooner ask forgiveness. One key proponent of the Just Third Way (Solidarism) votes for Capitalism reasoning as follows.

“The US has propped up dictators for decades, generally those who US leaders considered less threatening to America’s perceived interests than others perceived to be more hostile and dangerous. Those suffering under the more pro-American dictators have every reason to hate the US. But until recently, the oppressed did not have a vision of revolutionary change offering social and economic justice to the masses. And whatever vision the defenders of the oppressed had—generally visions based on socialist principles and class hatred—could never attract a critical mass of the American people to support their cause.

However, with Louis Kelso and Buckminster Fuller a new vision emerged, based on “economic justice” and interfaith spirituality—causes more basic than the rhetoric of “freedom”, “democracy” and “equality”—offering a win-win strategy for rich and poor, and establishing a “new system” (Solidarism) to level the playing field between the most powerful haves and the most powerless have-nots. The new system emerged in the US (not in Cuba or Socialist Russia) and showed us how to lift the barriers to true equality of economic opportunity .

Revolutionaries in the Solidarist movement should therefore work together to build a new global civilization where no one need be deprived of fundamental human rights, securing and enhancing everybody’s right to “life, liberty and property”. The challenge is to find new leaders who will focus and leverage America’s still tremendous technological, economic and political power behind Solidarism to spread the Justice revolution to citizens of every country in the world.

The Just Third Way (Solidarism) is the unifying moral revolution the world has been waiting for. Spreading the seeds of the Justice revolution is the US’ ultimate mission. Then the US will be loved again. Only when Americans wake up to the fact that the US can “win” by spreading this revolution—rather than by using financial and military “force” to further America’s interests at the expense of the oppressed—will Americans again be united and deserve to be proud of themselves. And only when Americans are united and proud of their contributions to universal abundance and to building a more just “new world” will the oppressed of the world again respect the US”.

Certainly a powerful defense of the Dick Cheney’s and George Bushes. Nevertheless, our vote is still for Castro. Let’s wait and see. The video we have selected for this article refers in its own way to a pending crucial transformation of society. Although our avenues of approach are different, there are points of convergence in the video with what we are saying. The transformation referred to in this article, however, focuses on a shift to a new economic paradigm (the binary economic paradigm shift), which will in fact also trigger many other transformations. Shift happens!