The Bottom, Saba (SNA): Representatives of Academic Athletic Success Group have been looking at several young boys from Saba who have shown potential to become professional baseball players. Several weeks ago some 5 young boys traveled to the island of St. Maarten to undergo some heavy training and several coaches from the USA were on the island looking at the boys.

Young Jovan Robinson has been selected to travel to the Dominican Republic late June early July for 6 weeks where he will be undergoing some training and if all goes well, he will be the first Saban youth to be selected to continue on to the USA and get signed up by a major league baseball club.
On Friday morning representatives of Academic Athletic Success Group namely Mr. Lloyd Euson and Rijnaldo “Cunga” Euson traveled to Saba and held discussions with Lt. Governor Sydney Sorton and Commissioner of Sports Mr. Bruce Zagers. They also had the opportunity to meet with the Minister of Sports of the Netherlands Antilles, Omayra Leeflang and also informed her of the prospects of Mr. Robinson and also the prospect for Mr. Nathan Peterson. Minister Leeflang also encouraged the young men to carry on and she looks forward to hearing good news about them in the future.

During the meeting with Lt. Governor Sorton and Commissioner Zagers it was agreed upon that a budget will be prepared as both Mr. Robinson and Mr. Peterson will have to travel to the island of St. Maarten every Saturday in order for them to undergo training before traveling to the Dominican Republic.

Funding for the the two young men to travel will either come from the Island Government of Saba or the CUS. Both Jovan Robinson and Nathan Peterson are students of the Saba Comprehensive School. Mr. Rijnaldo “Cunga” Euson said that according to him Jovan is ready to go now and Nathan still needs a little bit more work and he too will be ready to go. He said they will work with both of them in order to prepare them for great things. 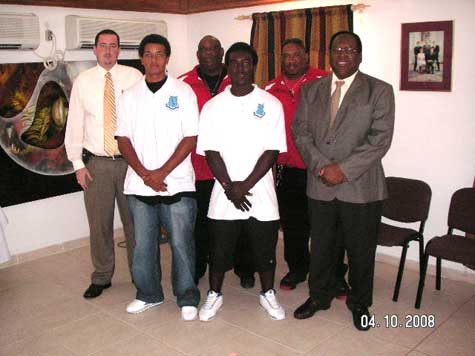