Joshua Spanner is a member of the Democratic Party and from time to time he seeks publicity to criticize his party and the Government. Some people on Statia call him “The Freedom Fighter”. He’s an independent man, with strong ideas about politics. We talked about his youth, black awareness, the hippie band and education.

The Sixties on Statia

When Joshua’s mother, Elaine Daniel, being black, was only 9 days old, Winnifred Sadler, a white woman, who didn’t have any children of her own, took care of her. She lived at the end of the street where her real mother lived, up on the corner of Paramiraweg and de Graafweg.
Winnifred Sadler was one of the sisters of the commissioner Esmond Sadler. Joshua used to call her “Nenen”, meaning grandmother or old aunti. “She was all of that for me, and more..” he says. 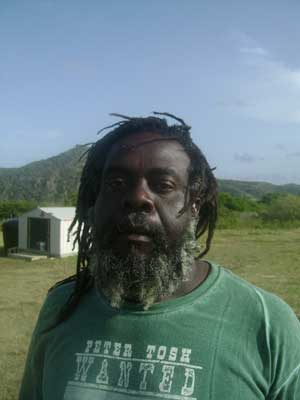 His father, Carol Spanner, had three children with his mother; Joshua and his two sisters.

When Joshua was born, his grandmother, the mother of his father, took him to her house. His mother used to come up to the house, to breastfeed the baby. Joshua grew up with a lot of space. His grandfather, Jacobus Henrique Spanner, had a rumshop, right up the corner of Faaschweg and van Perenweg. There were 5 or 10 white people on the island; Alfie Pandt was one of them. (He is the father of the now well respected tax specialist Max Pandt, who lives in Sint Maarten). Alfie Pandt had cattle down by the English Quarter, where he raised sheep, goats and horses. His two sisters, Miss Mordie and Miss Aida had a shop called “the Cottage’s store”. That shop is still a supermarket now.

These ladies were prejudiced people. When Joshua was a kid and he would come to the store to buy some twines for his kites, she would put a handkerchief in her hand to take his money.

About Miss Mordie there is a story to tell. When Joshua was a kid, that lady was an old lady. She said to the boy who used to work around the house, Leopold Hodge (who still lives in Oranjestad): “Mind you, when you get milk, don’t get it from a black cow!”

Of course Leopold Hodge used to choose the blackest cow he could find to get the milk from. She would taste the milk and sometimes she would say: “This milk tastes like it’s from a black cow!”

The other white people who lived up the mountain were Hesther Garret, Mays, Sharp and Bauer. Most of them retired people from America “who took their drinking seriously” as Joshua adds.

Peter John was a very important person. Whenever somebody moved house, or somebody died, or there was a marriage, or something else to celebrate, people would get Peter John to come and play the African drum. That music died out. You used to have people drumming along and playing the fifer (small flute).

In those days there were two theaters in town; Ideal Cinema, where the innovation bureau is now and Charley Theater, opposite Rivers enterprise. There was a lot of interaction with Saint Kitts. All the islands in the region used to go there to do shopping. There were people from Saint Kitts coming over for concerts and competitions.
The Hippie Band

And of course there was the Hippie Band. The Hippie Band played mostly in Lucas Carty’s rumshop, on the de Graafweg, behind Super Burger. Almost all the men on the island were farming. They would get up around 4 in the morning, go to the field, and when the work was done, they used to go to the rumshop to play cards or dominoes and drink. In the rumshop there were two guitars, a Marimba box and a bahoe (big pipe that makes the bass sound). Around Christmas time, starting by the end of November, they would play every night. And when the spirit held them, they would go out in the street. Everybody, young and old, would jam along with the Hippie Band.

On Sundays all the men used to wear suits. They would go to church and after church they went to the rumshop and then the Hippie Band would play.

Peter John and the Hippie Band were legends, but there were more legendary people in the old days. Joshua remembers Miss Paula, who was a life long educator and Daddy Courtar, who was “the doctor before the doctor”. People would go to him with their health problems or problems with their cattle. He would never charge a nickle.

These were the local heroes in those days. But Statia had more heroes in the past. Willy Doc, for example. Here’s the story of Willy Doc.

In 1939 there was a doctor from Surinam on the island. He made a girl from church pregnant and he was put in prison. But then his wife was ill and they wouldn’t set the doctor free to help his wife. Now the people, led by Willy Doc, released the doctor.

Willy Doc then orga-nized a revolt against the system. The po-lice force from Statia and St Maarten couldn’t handle the revolt, so the military from Curacao had to come in. 30 years later, Willy Docs’ son, Papa Godett, followed in his fathers’ footsteps.

The Hippie Band, statue in the garden of
the Government Administration Building,
known as ‘Government Guesthouse’
(cf. ‘Pasan-Grahan’ in Bonaire).

To Joshua all these stories and all these black heroes are important for the young people. He thinks that in school the children should learn more about the history of the region and about black heroes that can be role models. They have to learn about Tula and Karpata, they have to know about Marcus Garvey, Frederick Douglas, Malcolm X, about Mary Seacole, about the African Nationalist Movements in the 1970’s. Like Marcus Garvey said: “A people without the knowledge of their past history, origin and culture is like a tree without roots”.

His father left the island when Joshua was nine, so he did not really take care of him. But the one thing he is very grateful for is that his father used to send him two magazines: “Jet” and “Ebony”. These magazines were very important in the early seventies, when the civil rights movements were big and the African Nationalist movement were going on. In these magazines you could read about the history and current events from a black perspective. Reading these magazines at that age, was very important and made him aware of his own roots and the struggle black people have to go through.

Joshua is proud to be black and is proud that his ancestors were slaves from Africa. Regarding being black he says: “History tells us that all men originated from Africa, some left the continent and due to natural circumstances they changed color, but in fact all men are black! What may be the difference if there is a great great grandfather that was white and passed over his genes to the next generations? What could this difference be?” Descending from slaves is also something to be proud of: “In spite of the fact that the program was to work us to death, my ancestors were so strong that they survived. Today when I look back I think that the European people were rather stupid back then, because you just can’t kill the root!”